â€œWe have been working with the country of Senegal for almost one year. It was a wonderful opportunity to visit Senegal as a state guest. It has promoted our relations in a big wayâ€ said Sandeep Marwah Festival President of Global Film Festival Noida 2014.

Indo Senegal Film And Cultural Forum is going to be part of this international festival now on 11th to 13th November at Noida Film City. The organization then formed by the Minister of Culture, Government of Senegal during his visit to India to develop and promote films, television, media and culture of two countries.

â€œWe are impressed by the passion shown by the film makers of Senegal. Their interest for India cinema cannot be explained in Wordsâ€ added Marwah.

Wed Jan 6 , 2016
Marwah Studios is the most appropriate venue for exhibition of paintings as it caters to people from all strata of life who are art loversâ€ said Aruna Sethi Chairperson of Life And Style Committee of Indo American Chamber of Commerce while inaugurating the exhibition at Noida Film City. â€œWe have […] 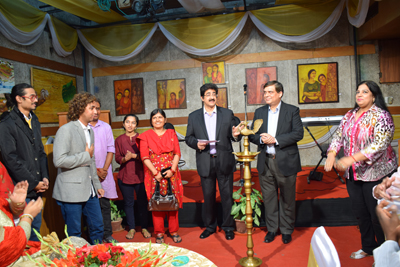