Noida: History has been written when first ever Indo Malaysian Film And Cultural Forum launched during the 2nd Global Fashion And Design Week Noida 2018 at Film City Noida organized by AAFT.

The High Commissioner of Malaysia to India H.E. Dato Hidayat Abdul Hamid announced the formation of Indo Malaysian Film And Cultural Forum as a gift to 2nd Global Fashion And Design Week as a part and parcel of ICMEI-International Chamber of Media And Entertainment Industry.

“India and Malaysia enjoy a very strong bonding, we have wonderful diplomatic relations. To strengthen our relations we will work more through cultural diplomacy. Formation of Indo Malaysian Cultural Forum is a step towards the same,” said H.E Dato Hidayat Abdul Hamid High Commissioner of Malaysia while launching the forum.

“Sandeep Marwah is an international personality and needs no introduction, he can be the Chairperson of the Forum. His experience, expertize and enthusiasm will add to our purpose,” added High Commissioner of Malaysia H.E Dato Hidayat Abdul Hamid.

“I am pleased to accept the Chairmanship of IMFCF-Indo Malaysian Film And Cultural Forum. I am thankful to the High Commissioner for trusting me and believing in   our way of working. We assure you and your Government that we will bring our relations to new height through this association,” said Sandeep Marwah receiving the honor from the highest officer of Government of Malaysia to India.

Sandeep Marwah, six world record holder in media, has been earlier honored with some of the best titles from all over the World as Global Green Ambassador, World Cultural Minister, Global Cultural Minister, Man of Asia, Personality of the Decade, International Media Guru, Global Cultural Ambassador. His reach is now to 145 countries of the World. Recently he has been awarded Doctorate from Serbia and USA. He has been also honored in House of Common in British Parliament as Peace Ambassador and Champion of Wales in Cardiff.

India and Malaysia both countries are full members of the Commonwealth of Nations, Asian Union and G15. Various cultural and historical ties that date back to antiquity also connect India and Malaysia. The two countries are on excellently friendly terms with each other seeing as Malaysia is home to a strong concentration of Indian immigrants.

Tue Apr 24 , 2018
Noida: The third edition of The Yogshala Expo 2018 has been scheduled from 4th May to 6th May 2018 at Hall no 7 of Pragati Maidan planned and designed by H.H. Jagdish ji Maharaj under the banner Namo Gange. The Yogshala Expo is bringing a platform for various Health & Wellness opportunities […] 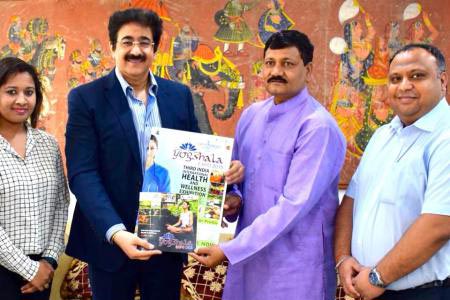