Noida: “We are more than happy to hand over the scholarship of AAFT Short Term Course to   the student from Kingdom of Lesotho as the gesture of goodwill and to promote relation between two countries under Indo Lesotho Film And Cultural Forum,” said Dr. Sandeep Marwah Chairman of ILFCF.

“After signing MoU between the Embassy of Kingdom of Lesotho and ICMEI- International Chamber of Media And Entertainment Industry we inaugurated Indo Lesotho Film And Cultural Forum. Handing over the scholarship is the next in the list ,” said Ashok Tyagi Secretary General of ICMEI.

“It is rare when you are given three benefits at the same time. One that I have collected the scholarship for the deserving student from Kingdom of Lesotho, second I have received the collection of Press coverage of our activities and third I am carrying the research work conducted by AAFT School of Mass Communication and Journalism on Lesotho. I pray for very strong relations between ICMEI and Embassy of Lesotho,” expressed H.E. Bothat Tsikoane High Commissioner of Kingdom of Lesotho to India while addressing the media persons at Marwah Studios.

Wed Feb 6 , 2019
Noida: IGFCF- Indo Gambia Film And Cultural Forum of ICMEI- International Chamber of Media And Entertainment Industry announced a scholarship for the deserving student from Gambia. Sandeep Marwah President of ICMEI handed over a scholarship to H.E. Jainaba Jagne The Ambassador of Gambia to India at the Embassy of Gambia […] 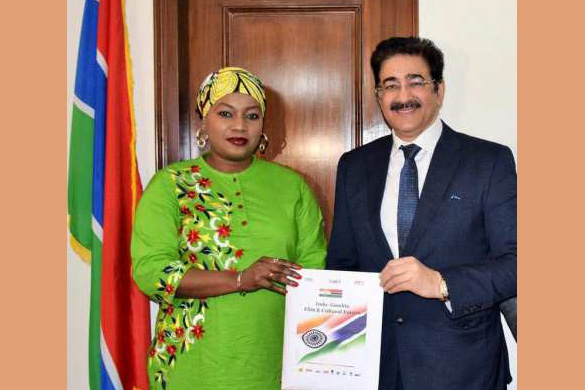