Noida: The Global Headquarters of International Chamber of Media And Entertainment Industry at Noida Film City was bubbling with new energy when Indo Comoros Cultural Formed was announced on the arrival of H.E. K.L.Ganju Consul General of Comoros to India.

“We are proud in joining hands and expanding our cultural business & cultural diplomacy through ICMEI. We are sure we will be able to deliver better and bigger results under the     leadership of great international leader Dr. Sandeep Marwah and his efficient team,” said H.E. K.L.Ganju Consul General of Comoros.

“I am lucky as this is the first event I am attending after being elected in General body meeting of honorary consular corps Diplomatique – India (HCCD-I) as the President of the corps for a term of three years, Formation of Cultural forum is a powerful action which is going to support   me,” added H.E. K. L. Ganju.

A poster with the flags of both the countries India and Comoros was released as a mark of respect to the wonderful relation both the countries are enjoying. H.E. K.L. Ganju nominated   Dr. Sandeep Marwah President of ICMEI and Marwah Studios as the Chair of the forum and return Dr. Marwah presented   the Patronship to Mr. K.L.Ganju.

A formal MOU will be signed between the two countries in a short period of time where ICMEI will support the office of Consul General with large number of cultural activities.” We are keen in developing and promoting relation between India and Comoros through art and culture which is our specialization,” said Dr. Sandeep Marwah.

‘Later AAFT mementos were presented to some of the prominent members of the Chamber attending the 12th International Festival of Cellphone Cinema, which was earlier inaugurated by H.E. K.L.Ganju.

Wed Jan 16 , 2019
Noida: A well known film and media person Dr. Sandeep Marwah President of Marwah Studios has been nominated as the Chair for Indo Comoros Cultural Forum by H.E. K.L.Ganju Consul General of Comoros in India.. “I am impressed by the amount of work Dr. Sandeep Marwah has so far done […] 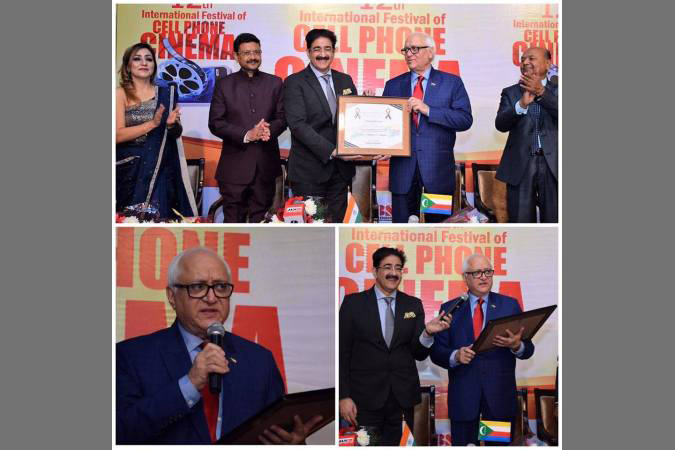