Noida: International Chamber of Media And Entertainment Industry in association with Consulate of Bahamas in India inaugurated Indo Bahamas Film And Cultural Forum at Marwah Studios. It was another feather in the cap of ICMEI when Honorary Consul of Bahamas Ashish Saraf inaugurated the first ever chapter of its kind in India under the leadership of Sandeep Marwah.

“I am feeling privileged and obliged to ICMEI for taking initiative in building better relations between India and Bahamas by starting Indo Bahamas Film And Cultural Forum,” said Ashish Saraf Honorary Consul of Bahamas in India.

“Both India and the Bahamas are members of NAM, G-77, WIPO, WTO (Observer), the United Nations, and its various subsidiary bodies. With democratic governance, respect for rule of law, and rights of their people, both share similar aspirations for accelerated economic growth, eradication of poverty, improvement in quality of life of their people, and promotion of equity,” said Sandeep Marwah President of Marwah Studios at the launching function.

Wed Jul 18 , 2018
New Delhi: The National Day of Bolivarian Republic of Venezuela falls on 5th of July but was celebrated on 12th of July with great pomp and show at the Premises of Embassy in New Delhi. The Chair of Indo Venezuela Film And Cultural Forum Sandeep Marwah was once again invited as the […] 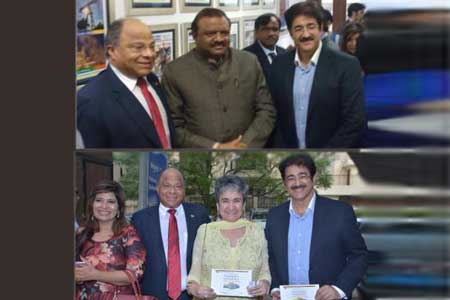