Mumbai: A conference was planned between the Indian players and American players to join hands in promoting game of Footvolley in India and also at international platform. Many points were discussed during the discussion on web.

“I am pleased to meet the enthusiastic players of Footvolley from both the nation India and USA. We still have to bring in zest in the this game in India as not many people are still familiar with the game. Continuous hammering to the press, Sports events and finally the competitions and tournament will take the games to new platform,” said Dr. Sandeep Marwah President Marwah Studios, Patron to Footvolley Association of India & Chairman for Media and Entertainment Committee of Ministry of Consumer Affairs, Food & Public Distribution, Government of India.

“We are ready to cooperate to our best to the Indian Footvolley association, need to be we are ready to part with trainers and coach to your team. The games are going through a tough time because of Pandemic, but we will keep our practice on,” said  Sergio Menezes President Footvolley Association of USA.

Sergio Menezes is the  Founder & CEO of Pro Footvolley Tour. He is the sport’s foremost personality, promoter, and executive in North America.  Menezes is synonymous with footvolley in the United States. He is a rare, and unique, executive who carefully, and patiently, re-packaged a Brazilian sport into mainstream acceptance in America.

“We are planning to have  an international Footvolley tournament in the month of November 2021 and would like You and your team to participate and grace this sports event. We would also like to invite you for a seminar with Indian sports person in due course of time,”

said Ram Avtar president of Footvolley Association of India  (F.V.A.I.), a highly talented personality and recipient of number of national and international awards in sports.

Thu Nov 5 , 2020
Mumbai: International Web Conference between India and Netherlands was recently organised to discuss the prospects of World Footvolley  Tournament to be held in India in November 2021. The Footvolley Association of India is planning to host an International tournament of Footvolley in India next year sometimes in October and would […] 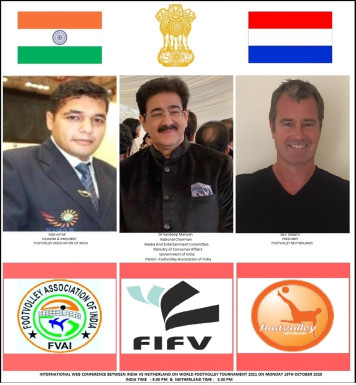