Noida: A delegation of 14 senior officers of Government of Lesotho under the leadership of the Principal Secretary Office of the Prime Minister of Lesotho Ms Mataeli Makhele visited Marwah Studios to understand the media and entertainment industry of India on the recommendation of Ministry of External Affairs, Government of India.

The delegation was received by well known international personality Sandeep Marwah President of Marwah Studios. A detailed session was conducted at studios about the print, radio, television, cinema, new media and educational activities in India.

“We got the opportunity not only to inform about the industry but to discuss in detail what all we can do together with Lesotho,” said Sandeep Marwah

“I am impressed by the facilities and success of this institution. We are ready to take best advantage of Marwah Studios to revive our film industry,” said Mataeli Makhele Principal Secretary Office of the Prime Minister of Lesotho Government of Lesotho.

“We thankful to the Ministry of External Affairs, Government of India and International Chamber of Media And Entertainment Industry for organizing more than a summit for the delegates of Lesotho,” said Makhatwe E. Mankimane First Secretary High Commission of Lesotho.

Sandeep Marwah Honored by The Government of Lesotho

Mon Dec 4 , 2017
New Delhi: The 14 member delegation from the Kingdom of Lesotho honored and appreciated the efforts of Sandeep Marwah for bring the whole World together for love, peace and unity through art and culture. “We are privileged to be the part of this great institution now which has created six […] 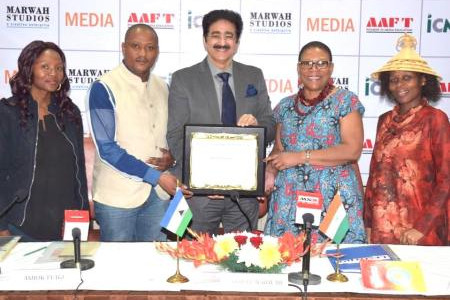