The memento was presented to Vijay Goel Minister of state for parliamentary affairs and statistic and implementation Government of India by the Chairperson of Hindi Cinema Samman Samaroh Samiti Shatrugan Sinha, President of the Chamber Sandeep Marwah, renowned cine star Jackie Shroff and General Secretary CINTAA Sushant Singh in the capacity of Chief Guest of the occasion.

“It is not only a unique idea but a tremendous support to Hindi Cinema, I congratulate the genius and pioneer in many areas Sandeep Marwah for a successful and grand award function. This is the first time Hindi Cinema is awarded with this kind of National Award,” said Vijay Goel inaugurating Hindi Cinema Samman Samaroh. 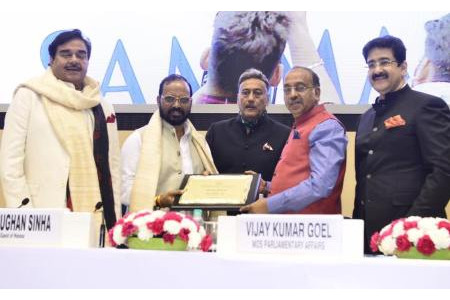