Noida: Radio Noida and MSTV can be of great help in propagating Khadi and its products all over the World, as both are world broadcasters. We need to promote Khadi to help villagers and small scale units in India,” said Jainandu of Khadi Gramodyog Sansthan addressing the media persons at Marwah Studios at Noida Film City.

“Our job is to create the awareness for khadi so that more people can use khadi which ultimately will help the small scale industry. Our fashion school has a full chapter on khadi products,” said Sandeep Marwah President of ICMEI and AAFT requesting audience to use khadi products.

“First khadi was ‘Khadi for nation,’ then we tried to make it ‘khadi for fashion,’ and now it has become ‘khadi for transformation.’ Handloom is changing the lives of poor people by empowering them. It is playing a major role in gram uday,” Our Prime Minister Narendra Modi also said during his monthly radio address, Mann ki Baat.

Thu Feb 1 , 2018
Noida: The new session of Asian Academy of Film And Television was inaugurated with great pomp and show at the campus of Marwah Studios at Noida Film City. “Positive thinking will help you to shaken up the universe. You have to be honest to your work to be a great […] 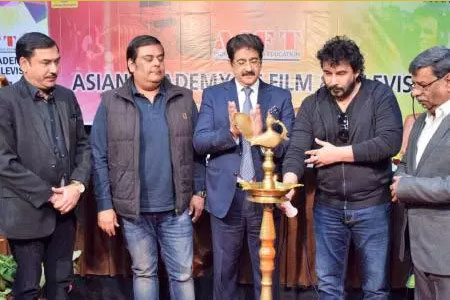