More than 4500 students were sensitized in the school and around 1000 student participated in drawing competition projecting environment and global warming. All the students were motivated by presenting them a participation certificates and mementos.

“Global warming is a phenomenon of climate change characterized by a general increase in average temperatures of the Earth, which modifies the weather balances and ecosystems for a long time. It is directly linked to the increase of greenhouse gases in our atmosphere, worsening the greenhouse effect,” informed Dr. K.D.Gupta Chairman of Environment Committee of ICMEI.

“The exploitation of forests has a major role in climate change. Trees help regulate the climate by absorbing CO2 from the atmosphere. When they are cut down, this positive effect is lost and the carbon stored in the trees is released into the atmosphere,” said Dr. Sandeep Marwah President of ICMEI and AAFT

Sushil Tripathi former Secretary Government of India was the chief guest, Sushil Bharti of Radio Noida 107.4 and MSTV of Marwah Studios covered the event to showcase to larger audience.

Wed May 15 , 2019
New Delhi: “We on behalf of International Chamber of Media And Entertainment Industry extend our heartiest congratulations to H.E. Dr. Ron Malka and   people of Israel a very Happy National Day,” said Dr. Sandeep Marwah President of ICMEI at the National Day Celebration at Hotel Maurya Sheraton. We have wonderful […] 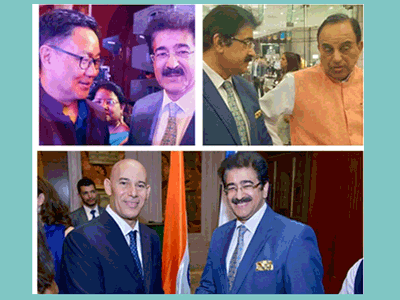