New Delhi: International Chamber of Media And Entertainment Industry is marching towards its goal of creating 162 international committees activated for uniting the World through films, art and culture.

A new association under the name and banner of Indo Maldives Film And Cultural Forum has been created by ICMEI, proposed and inaugurated by H.E. Ahmed Mohamed High Commissioner of Maldives to India on the second day of 5th Global Festival of Journalism Noida 2017.

â€œThe formation of Indo Maldives Cultural Forum is an initiative to bring in better relations between India and Maldives. This leads to love, peace and unity between the two countries,â€ said H.E. Ahmed Mohamed High Commissioner of Maldives to India.

â€œWe have already designed some of the interesting programs like studentâ€™s exchange, faculty exchange, film festivals, joint productions, film tourism to start with the country of Maldives. Many new ideas will come in the next few weeks,â€ said Sandeep Marwah President of Marwah Studios talking about Indo Maldives relations.

Sandeep Marwah has been nominated as the Chairperson of the forum by the High Commissioner and was presented with the memento. Later Marwah proposed H.E. Ahmed Mohamed as the patron of the organization and handed over the certificate of the patron ship.

High Commissioner Ahmed Mohamed inaugurated the exhibition of photography by the students of Asian School of Media Studies, released the poster of Deen Dayal Upadhayaya Forum and the news letter of the festival on the same day as mark of cultural exchange.

Wed Mar 15 , 2017
New Delhi: â€œWe have been developing and promoting our relations with the Republic of Guatemala. Few events have been designed to propagate our relations and workings but lot more is needed in time to come,â€ said Sandeep Marwah Chairman Indo Guatemala Film And Cultural Forum of ICMEI â€œI am more […] 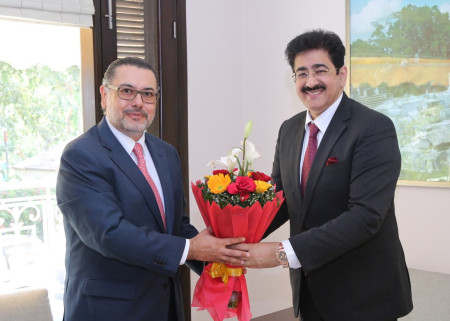