New Delhi; A grand show was organized by ICMEI- International Chamber of Media And Entertainment Industry in association with Sangam Kala Group and AAFT School of Performing Arts to honor some of the most important people associated with music industry at Srifort Auditorium at New Delhi followed by musical evening with Sonu Nigam.

â€œWe are proud to be associated with this powerful music evening which has created a huge buzz in the city. The students of AAFT School of Performing Arts are lucky to be part of this great extravaganza,â€ said Sandeep Marwah President of International Chamber of Media And Entertainment Industry & Marwah Studios.

Sonu Nigam often called as the Lord of Chords and The Elvis Presley of India, is an Indian musician, singer, composer, music producer, recordist, music programmer, live performer and actor. He prominently sings in Hindi and Kannada language films.

â€œSonu Nigam has been one of the highest paid Indian singers. He is one of the most versatile singers of bollywood industry. The support of Marwah Studios, ICMEI and AAFT brought the show to Delhi,â€ added Sood from the stage of Srifort.

Sandeep Marwah on the Board of Bharatiya Chitra Sadhana

Thu Oct 12 , 2017
New Delhi: Sandeep Marwah renowned film and media personality and president of Marwah Studios has been taken on the board of Bharatiya Chitra Sadhana a National body created to bring in a feeling of patriotism in the youth of the country through films, television and media. â€œThe first event we […] 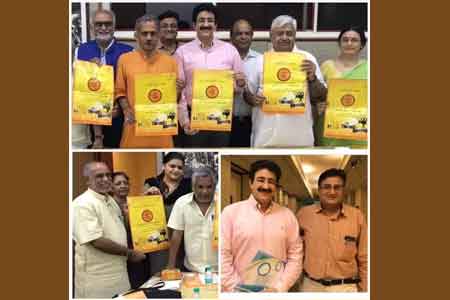