New Delhi: â€œInternational Chamber of Media And Entertainment Industry has opened a new chapter by joining hands with the Republic of Mozambique today. The purpose is to develop a new series of relations through art and culture,â€ said Sandeep Marwah President of ICMEI.

â€œWe can grow together and can do a lot through films and television, art and culture. We need support from India. We can develop an excellent exchange programs through ICMEIâ€ said H.E. Jose Maria Morais High Commissioner of Republic of Mozambique in India.

ICMEI and Embassy of Mozambique will work together on the development of student, faculty and film festival exchange programs. A scholarship to a Mozambique student will also be announced soon.

Gabor N. Forgacs (born October 6, 1969) is a Hungarian film director, producer, cinematographer, and he also serves as the chairman of Parabel Film studio. In a career of more than two decades, he is best known for film The butterflies, a culture shock psychodrama which was released in summer 2013, at the 35th Moscow International Film Festival.(ANA)
Interaction Program With Randall Feldman At IACC

Noida Film City: â€œAAFT works on each and every student thoroughly so that all his best qualities must be visible to the public. Ahran has done well for himself. He will do wonders in no timeâ€ said Sandeep Marwah President of AAFT while introducing him to the current students.

Please pay heed to what all are said in the institution especially Marwah Sir whose nor even one suggestion has ever gone wrong. I am product of AAFT and I have used every little thing learned during my tenure here,â€ said Ahran Chaudhary during his visit to Alma matter.

It was a small and beautiful interaction of current students who were more than excited to see an established actor of AAFT back home.
World Press Freedom Day Celebrated at IJC

The third theme is digital safety, a topic of growing concern because digital communications makes it difficult for journalists to protect themselves and their sources. International Chamber of Media And Entertainment Industry & International Human Rights Organization supported the event.
Mohit Marwah â€“ Star of the movie FUGLY @ Asian Business School

It was just another Friday. And everyone at Asian Business School was busy completing their daily tasks. It was indeed an ordinary day turned interesting as the staff and faculty members were delighted to meet Mohit Marwah, a young and vibrant film actor who is the lead star of the movie Fugly.

Mohit Marwah, like any other aspiring actor, is self made. Even though he has the pedigree to boast off, he took it upon himself to ensure that he works his way to stardom. An alumni from Don Bosco School and University of Delhi, he is the latest Bollywood actor to become the brand ambassador for Provogue. He has a diploma in Film Making from Asian Academy of Film and Television and a specialization in Acting from Lee Strasberg Acting School, New York.

He was accompanied by Sandeep Marwah, chairman of the Asian Education Group and charmed the staff and faculty members with his humility, style and class. It was indeed a very good experience for everyone at Asian Business School to have met him.

The handful of students from PGDM 2013-15 batch, who are awaiting their joining in their respective organizations, were very pleased to have had the opportunity to meet with a celebrity.

We were proud to have Mohit Marwah in our midst and look forward to meeting him soon.
R K Singh On The Board of Broadcast Committee of ICMEI

[R K Siingh on the Board of ICMEI]

Noida Film City: The board of Directors of International Chamber of Media And Entertainment Industry has nominated R.K.Singh the former Engineer In Chief Doordarshan as the Chairperson of Broadcast Committee of ICMEI.

â€œWe hope and presume that R.K.Singh will bring his gigantic proficiency in the field of broadcasting to the growth of Chamber and in his leadership the committee will touch new heightsâ€ said Sandeep Marwah President of the Chamber.

â€œIt is my time to give back to the society and I will leave no stone unturned to put my best into the chamber as far as broadcasting committee is concernedâ€ thanked R.K.Singh accepting the letter of appointment.
Babita Saxena Nominated Chairperson of Event Committee at ICMEI

Noida Film City: â€œWe have the pleasure to nominate Babita Saxena an event Management Expert to chair the event Management Committee of International Chamber of Media And Entertainment Industryâ€ said Sandeep Marwah President of ICMEI handing over the letter of appointment to Babita.

â€œIt is a wonderful opportunity for me to serve the industry through ICMEI the biggest Chamber in the World for entertainment and Mediaâ€ thanked Babita Saxena. Ashok Tyagi secretary General of ICMEI issued a letter of appointment to Babita at Noida Film City.

Babita Saxena, Founder and Director of Value Your Image, is a Qualified Image Consultant. She is a postgraduate in Mass Communication. Being a Media person she has done a lot of work on Doordarshan and Radio and has been awarded number of times.

she taught in various schools across India. She loved creating scripts and dubbing the same for various portals.. She worked as an Events and Communications Manager. Her research in the field of Image Management and her Communication skills gave her the opportunity to become a Trainer at Finishing Schools.

Sat Jan 9 , 2016
New Delhi: â€œ!0th March 1991 the first private film & TV studio of North India started functioning from Noida Film City. It was a great occasion for the people of North India who were given the platform to come forward in the field of film and television businessâ€ recollected Sandeep […] 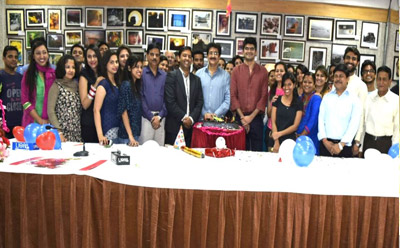