Sandeep Marwah informed the Deputy Chief of Mission Etienne BUREGEYA how the Film City, Noida has become the fastest growing film city in the world and how the ICMEI- International Chamber of Media & Entertainment Industry-located over there is rapidly uniting the world through art and culture.

To boost the growth of the film and television industry in Burundi, Sandeep Marwah offered a scholarship to a deserving student from Burundi to come and study a short-term 3-month course in a subject of the studentâ€™s choice at AAFT.

Marwah proposed that Indo-Burundi Cultural Forum be launched to pursue many proposals on a regular basis and the ambassador of Burundi Her Excellency Ms. KATABARUMWE Regine should come and inaugurate the forum at the international headquarters of ICMEI.

Sat Jul 16 , 2016
New Delhi: Indo Bosnia And Herzegovina chapter got promoted when ICMEI International Chamber of Media And Entertainment Industry brought Bosnia Athlete to its radio and television. One time renowned basketball player from Bosnia And Herzegovina now renowned Therapist is consultant to many companies and enjoying her status as advisor. Vesna […] 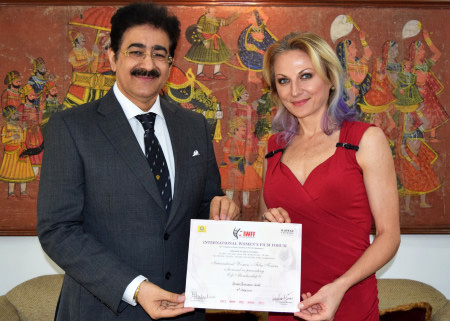