Noida: The first ever film and cultural forum of Country of Georgia in India was launched here at the International Head quarters of International Chamber of Media And Entertainment Industry.

“I am pleased and honored to inaugurate Indo Georgia Film And Cultural Forum           on this auspicious day of Dhanteras of Indian calendar and I am sure that we will do   better from today onwards in our relations with India,” said H.E. Archil Dzuliashvili Ambassador of Georgia to India while releasing the poster of IGFCF at ICMEI at Noida Film City.

“We have achieved a lot today by inaugurating Indo Georgia Film And Cultural Forum. Many ideas are there to execute under this forum including Scholarship to deserving student from Georgia, Festival of films from Georgia, students exchange program, institutional tie ups etc.,” said Dr. Sandeep Marwah President of Marwah Studios addressing to the media persons at the launching function.

H.E. Archil Dzuliashvili Ambassador of Georgia to India nominated Sandeep Marwah as the Chair for Indo Georgian Film And Cultural Forum and congratulated him for bringing ICMEI to Georgia. On the other hand Sandeep Marwah requested the Ambassador to be the Patron of the organization.

Dr. Sandeep Marwah presented a life membership of International Film And Television Cub of AAFT to H.E. Archil Dzuliashvili along with memento of patron ship of IGFCF.

Mon Nov 12 , 2018
Noida: A delegation comprising of educationist from South Korea visited Marwah Studios to interact with the students of Asian Academy of Film And Television. Kim Dong Yeop, Lee Chanhee, Song Chi Moon who are associated with International Youth Fellowship, South Korea and had interaction with Sandeep Marwah President of Asian […] 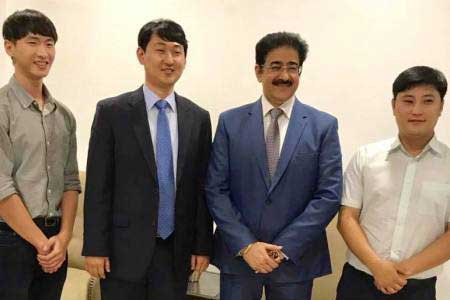