The visit of Karma Tshering, Chairman of newly formed National Film Commission of Bhutan in the Ministry of Information and Communications, Royal Government Of Bhutan, brought many points of discussion on the table for the promotion of relations between two countries India and Bhutan, and especially development of cinema in Bhutan.

Recently Indo Bhutan Film And Cultural Forum has also been formed at ICMEI under the Chairmanship of Dr. Sandeep Marwah President Marwah Studios to have cordial and strong relations with Bhutan through films, television, media, art and culture.

Karma Tshering is one of Bhutan’s first trained filmmakers and produced Bhutan’s first commercial film titled “Jigdrel” in 1998. He founded Bhutan’s first and only women’s magazine “Yeewong” and “Miss Bhutan Pageant” in 2008 to create a platform for young Bhutanese women. He has been successfully managed to set the first Guinness World Record for Bhutan in Tree Plantation in 2015 where 100 Bhutanese men planted 49,672 trees in 1 hour setting a new world record on 2nd June 2015.

AAFT Alumnus Karma Tshering Currently serves as the President of the “Film Association of Bhutan” and Chairman of the “National Film Commission of Bhutan”. Later Chancellor Dr. Marwah honored Karma with life membership of International Film And Television Research Centre of AAFT University.

ICMEI And Alugha Will Work Together For Film Promotion

Fri Oct 11 , 2019
Noida: International Chamber of Media And Entertainment Industry join hands with Alugha A German company to promote short films world wide in different languages. A meeting took place at the Chamber headquarters and a session was organized for the young enthusiastic filmmakers & cinema students who are looking for more […] 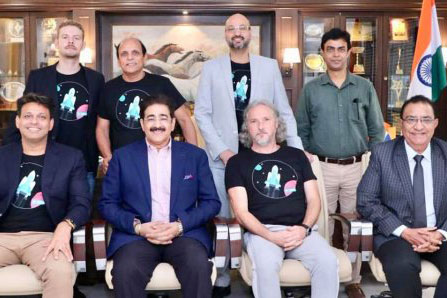