Noida Film City: First National level meet and competition for the media persons and student community under the name and banner of India Media Fest 2015 has been planned for 16th & 17th March at New Delhi.

â€œThese kind of events are required in Delhi to keep the media unite and also aware of what is happening in other parts of the Worldâ€ said Sandeep Marwah President of Marwah Studio and ICMEI while releasing the first poster of Media Fest at Noida Film City.

ICMEI-International Chamber for Media And Entertainment Industry will be supporting the event organized by briatoshs. Some of the prominent people of media will be taking the workshops and will be part of seminars.

The organizing team consists of Babita Biswas, Debasish Sarkar and Shikha M Leo along with Ashok Tyagi Secretary General ICMEI and media students from AAFT were also present on the release of poster.

Sandeep Marwah Honored For His Contribution to Literature

Wed Jan 6 , 2016
New Delhi; â€œAsian Academy of Arts has been a big initiative taken by Sandeep Marwah not only to promote fine and performing arts but also the literature in specific. Creation of Publishers Club, Writers Forum and book releases events at ACA- has added to literature promotionâ€ a citation read by […] 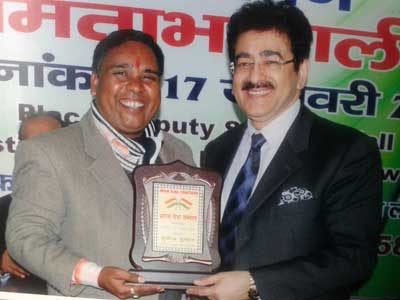