Sandeep Marwah explained to His Excellency that International Chamber of Media and Entertainment Industry [ICMEI] is the only chamber in the world, which is exclusively devoted to media and entertainment industry and is driven by the mission of uniting the world through art and culture.

Koffi Akakpo said,â€ French dubbed versions of Indian Cinema is extremely popular in Togo and we are open to joint venturesâ€.

Sandeep Marwah, President ICMEI said that offering scholarship to a deserving person from Togo for a short-term course at AAFT could make a beginning. A short film can also be sponsored for a film director from Togo.

Sandeep Marwah invited His Excellency to visit ICMEI campus located at Film City, Noida so that he can see the infrastructure and the pool of knowledge available to the chamber

Sat Jan 9 , 2016
New Delhi: â€œIt seems that theatre has revived I can say after seeing the jam packed and over flowing crowd of youngsters today here at Sriram Centreâ€ said Sandeep Marwah President of Marwah Studios congratulating every one connected to LEHAR Theatre Group of Asian Education Group at the opening of […] 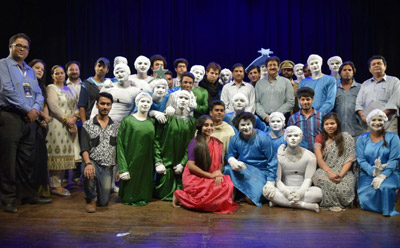