We have extended our cooperation to the country of Mauritius in the field of film, television and media. The people of Mauritius have loved Indian cinema and television programs,â€ said Sandeep Marwah President ICMEI and Marwah Studios inviting Ambassador of Mauritius to be part of Chamber.

Secretary General of the International Chamber of Media & Entertainment Industry (ICMEI) Ashok Tyagi visited His Excellency Joyker Nayeck, the High Commissioner of Mauritius to brief him about the chamber.

â€œI appreciate the efforts of ICMEI to work towards better relations between the two countries India and Mauritiusâ€ said H.E. Joyker Nayeck.

ICMEI also informed the Second Secretary Embassy of Mauritius Prema Appadu about the activities of Chamber.

ICMEI Will Work With Sultanate of Oman

Wed Jan 6 , 2016
We may not have a film industry but would try in developing one in our country. We would love to join hands with International Chamber of Media And Entertainment Industryâ€ said H.E. Hamed Saif Ali Rawahi during the visit of ICMEI delegation at Embassy of Sultanate of Oman at New […] 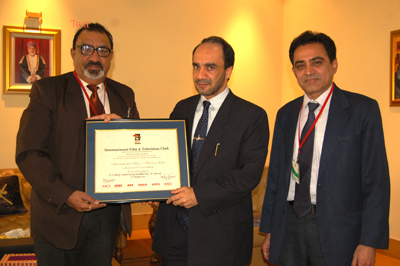