New Delhi: A well-known film personality Sandeep Marwah President of ICMEI- International Chamber of Media And Entertainment Industry on Tuesday extended best wishes to The Bahamas on their National Day. The official letter of congratulatory message was sent to the consulate office.

“We cherish our warm relations with The Bahamas & see a great scope for expanding our ties which can benefit our people. The Bahamas observe July 10 as the National Day to commemorate the nation’s independence from the United Kingdom in 1973.

Wed Jul 11 , 2018
New Delhi: A grand function was organized by PHD Chamber of Commerce in association with Marwah Studios to honor Twenty-Five of the prominent artists of National fame who all have brought glory to India at PHD auditorium. “Art and culture is the only way to bring all the segments of […] 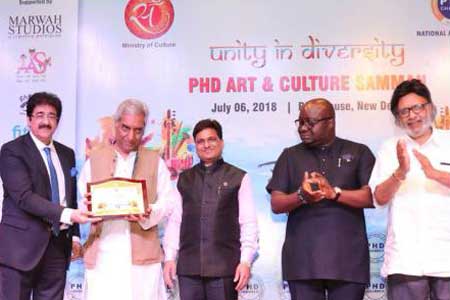