Noida: The President of International Chamber of Media And Entertainment Industry Sandeep Marwah extended his congratulations to the Consulate       office in India and the people of Kiribati on the National Day falls on 12th July,

“Diplomatic relations between India and Kiribati were established on 6 August 1985. Kiribati has supported the India’s candidatures at various international organizations, and was one of 34 countries to co-sponsor the G-4 resolution on the reform of the United Nations in 2005. We are sharing beautiful relations with Kiribati,” said Sandeep Marwah celebrating National Day at Marwah Studios.

ICMEI has already created a committee on Kiribati and shall wait for the right time to inaugurate the Indo Kiribati Film And Cultural Forum informed Ashok Tyagi Secretary General of ICMEI.

Tue Jul 17 , 2018
Noida: ICMEI and its complete team presented Patronship to Ashish Saraf the Head of the Mission Republic of Bahamas to India in a grand function at Marwah Studios, Film City Noida. “We are sure that Indo Bahamas Film And Cultural Forum will progress under the patronship of Ashish Saraf Cosul […] 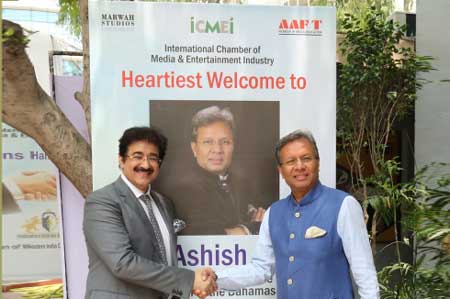