Noida Film City: â€œThis is for the first time that any Chamber of Commerce is dedicated to the activities of films, television, media and Entertainment Industry in the World,â€said Sandeep Marwah â€“Five times World Record Holder, President of Marwah Studios and ICMEI.

â€œThe chamber has also included a committee on tourism, skill Development, Fashion and Environment recently. We have encouraged through Chamber to open a skill Development Council, a School on Hospitality and Tourism, a School of Fashion and Interior Designing and promoting environment and climate subject from school to schoolâ€ added Marwah who has already attained a tittle of World Media Guru.

ICMEI probably the only Chamber to have its own News Paper, Radio Station, TV Channel, Film And TV Production House, Research Centre, Film Studios, a film School and a Business School.

Sat Jan 9 , 2016
Noida Film City: â€œAAFT Festival of Short Digital Films is the only film festival in the World to touch 86th Edition. This is the only festival which has given an opportunity to more than 2000 directors to showcase their debut filmâ€ introduced Sandeep Marwah President of Marwah Studio in a […] 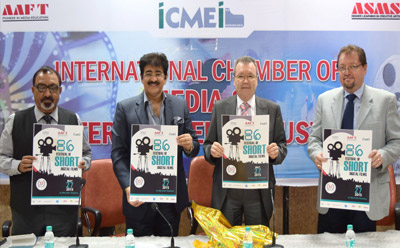