Noida: The celebrations took place at the international head quarters of International Chamber of Media And Entertainment Industry at Noida when French director was signed for short film under Indo- French Cultural Forum of ICMEI.

â€œI was looking for a platform to join hands for making of short film in India when Sandeep Marwah noticed my talent and grant me the facilities to direct one film under ICMEIâ€ said Moane Elyane Maria Rosello film director from France.

â€œWe want to provide a wonderful platform to our guest directors from abroad. Asian Academy of Film And Television and Marwah Studio will support to the production of film at Delhi/Noida,â€ said Sandeep Marwah President ICMEI & AAFT.

The film will be part of the 162 short films announced by Sandeep Marwah during his visit to London recently. The making of films together leads to the development of wonderful relations between two countries through art and culture.

Sat Jan 9 , 2016
New Delhi: More than 25 young and senior artists join together to present a powerful group-painting exhibition at All India Fine Arts Cultural Society hall at New Delhi. â€œThe appropriate tittle SPARSHA for exhibition has enhanced the show. Sparsha means- a touch. It is the series of touches- canvas with […] 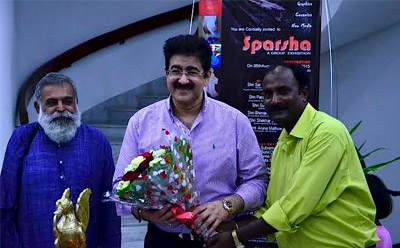