Noida Film City: â€œICMEI will open an â€˜Indo Ecuadorian Media And Culture Associationâ€™ to give boost to the films, television. media and cultural activities of both the countries to bring people of two countries togetherâ€ suggested Sandeep Marwah President of ICMEI in a joint meeting at Chamber.

â€œWe are open to develop and promote our relations with India through culture as it is the fastest way to reach masses. My visit to International Chamber of Media And Entertainment Industry has become historical one. I believe we can do a lot together,â€ said H.E. Mentor Villagomez, Ambassador of The Republic of Ecuador in India.

We will leave no stone unturned to cooperate to ICMEI in developing new avenues of cooperationâ€ added Dr. Patricio Garces, head of political and cultural affairs, Embassy of Ecuador in India.

Ashok Tyagi, the Secretary General of ICMEI briefed the Ambassador about the activities of the Chamber and how the chamber is promoting art and culture of India and its relationship with other countries too. Later Marwah honored the Ambassador with the life membership of International Film And Television Club of AAFT.

Sat Jan 9 , 2016
Noida Film City: â€œWe have created a World Record by touching 86th Edition of our festival. There is no other festival in the World to reach to 86th edition so farâ€ said Sandeep Marwah President of Marwah Studio at the inauguration of 86th AAFT Festival of short Digital Films at […] 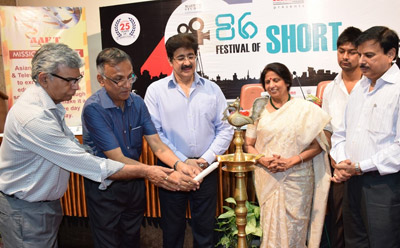