Noida: Sandeep Marwah of Marwah Studios has wonderful and long lasting relations with the country of Hungary. He is the only Indian to be honored four times in Hungary for his involvement with different organizations through films, art and culture.

This time a powerful two persons delegation consisting of Janos Zolcer a senior film producer & Journalist from Budapest and Zsolt Pakozdy Counsellor Economy and Trade from the Embassy of Hungary in New Delhi visited Asian Academy of Film And Television at Noida Film City.

Earlier I had heard of now I have seen AAFT with my own eyes, Why it has been rated as first ten best film schools of the World. I appreciate the gesture extended towards me by Marwah,” said Janos Zollcer producer of more than 100 documentaries in Budapest.

Sandeep Marwah is an old friend to Hungary. He is   the most popular Indian in Hungary. Indian Hungarian cultural relations have taken a new shape under leadership,” said Zsolt Pakozdy Chief Counsellor Economy and Trade, Embassy of Hungary in India.

Sat Jun 23 , 2018
New Delhi: “Women have an equal right to do what men have been doing. Gone are the days when limited professions were reserved for women. Now they can be in any profession and business hand in hand with men,” said Sandeep Marwah President Marwah Studios while lighting the ceremonial lamp […] 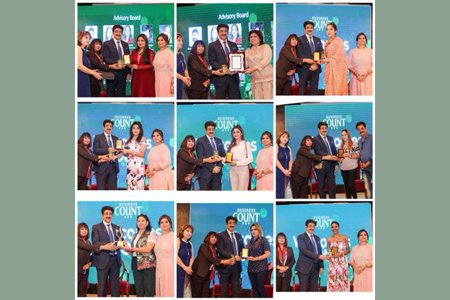