Noida: One of the oldest organization, INFA- Indo Nigerian Film Association, to promote and develop the relation between India and Nigeria has been running under International Chamber of Media And Entertainment Industry with its International head Quarters at Noida Film City.

The President Sandeep Marwah, who has been associated with the organization from the day of its inception, has honored H.E. Major General Chris Sunday Eze High Commissioner of Nigeria to India with the Patron ship of the organization.

“It is a great honor to have with us H.E. Maj General Chris Sunday Eze the High Commissioner of Nigeria to India on the board as the Patron of the organization. I am sure we will be able to look much ahead under his leadership,” said Sandeep Marwah President of the association.

“So well has been done and I am sure much more will be done under the leadership of Marwah. We need leaders like Marwah to run the show,” said H.E. Eze while accepting the Patron Ship.

The event was attended by many Nigerian professionals and students associated with films, art and culture. Later High Commissioner presented the certificates of membership to new members also.

Sandeep Marwah Honored for His Services to Indo Nigerian Relations

Sat May 12 , 2018
Noida: More than 100 dedicated students who have been trained by Marwah under Asian Academy of Film And Television for different courses in last 20 years from different parts of Nigeria has brought the film industry of Nigeria to a new status. It has become the second biggest industry in […] 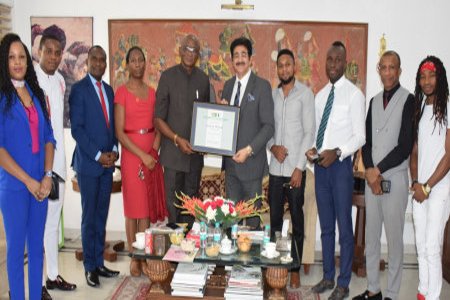