A well known Spanish Film Maker David Canvosa and popular filmmaker from Israel Henna Anzi together released the first poster of one of the biggest film festival of India- Global Film Festival on the invitation of Festival President and Global Cultural Minister Sandeep Marwah.

â€œIt is my honor that I have been given this beautiful opportunity to be a part of an international event at Marwah Studios. I will carry poster back home as a part of my all time memories,â€ said David Canvosa.

â€œI am sure about the success of 10thÂ Global Film Festival Noida as I have been also part of this festival earlier. It is one of the most vibrant festivals of the World,â€ added Heena Anzi congratulating Sandeep Marwah.

Sat Nov 4 , 2017
New Delhi: An exhibition of art and culture from different states of India was held at Agha Khan Complex at New Delhi where many young and new entrepreneur were given an opportunity to showcase their products. Renowned film and media personality Sandeep Marwah President of Marwah Studios inaugurated the exhibition. […] 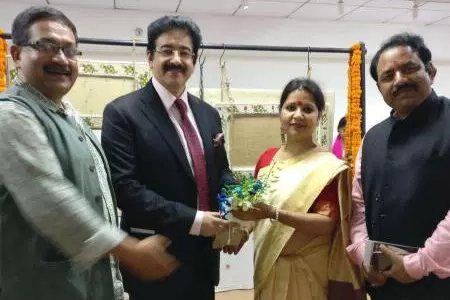