Noida: â€œFilms are the best way to project culture of any country. The screening of films in India from Guatemala will leave a strong impact on the audience. Not only they will realize the beauty of the country from the picturesque locations but will understand the way of life thereâ€ said Sandeep Marwah President Marwah Studios on the grand opening of festival of films from Guatemala.

â€œWe are the facilitator and would love to pass on the information on Guatemala as required by you all. We expect producers from Indian film Industry soon will opt Guatemala as their location for films. We are more than ready to support you,â€ said H.E. George de La Roche Du Ronzet Ambassador of Republic of Guatemala to India.

â€œWe would prefer a festival of Indian films in Guatemala, I am sure people must be familiar with our biggest film industry of the Worldâ€ expressed Boney Kapoor renowned filmmaker and former President of Film Federation of India.

Ashok Tyagi spoke about the International Chamber of Media And Entertainment Indusry and Danilo R. Marcucci Minister Counsellor & Deputy Head of Mission spoke about the quaifications of the country.

Four films are going to be screened in the festival. The festival remained open for public on 12th and 13th of April. Later Sandeep Marwah honored Ambassador with Life membership of International Film And Television Club of AAFT and International Journalism Centre to Boney Kapoor. Ambassador honored Sandeep Marwah with the Chairmanship of IGCF- Indo Guatemala Cultural Forum.

Exhibition of Photographs from Guatemala at Film Festival

Fri Apr 15 , 2016
Noida: Large portraits of colorful shots of people, hill views, lake sides, sports and games and different buildings were more than enough to highlight the culture of the Republic of Guatemala during the exhibition of prints curated by the Embassy of Guatemala in India sponsored by the Ministry of Culture, […] 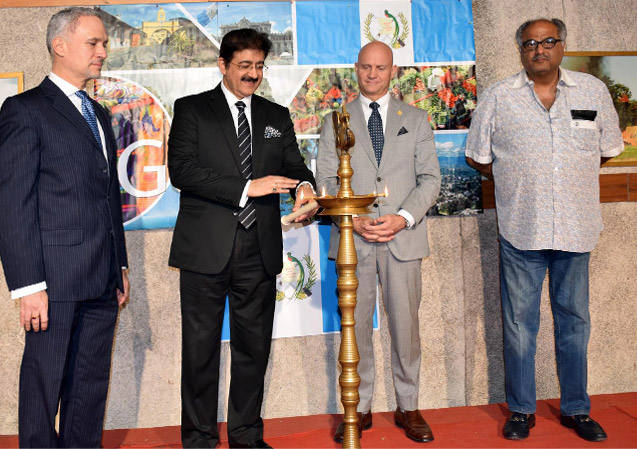