Noida: Three days festival of Films from Bosnia And Herzegovina was inaugurated today at Marwah Studios at Noida Film City with great pomp and show.

“Under Indo Bosnian Film And Cultural Forum It was decided at International Chamber of Media And Entertainment Industry to have a festival of films in association with AAFT University of Media And Arts and invite people from film, television, media art and culture fraternity. Bosnian films have brought many accolades in different international festivals,” said Dr. Sandeep Marwah President of Marwah Studios.

The event started with the lighting of ceremonial lamp by Lt. General K.M. Seth former Governor of Chhattisgarh, Madhya Pradesh and Tripura who congratulated Embassy of Bosnia And Herzegovina for opting the best venue– Marwah Studios for the first festival of Bosnian Films. ”I am aware that Bosnia produces 5to 6 films in a year but every film is a piece of art,” said Lt. Gen. K. M. Seth.

“We have brought best six films with two most popular film directors from Bosnia to interact with Indian audience. We all are witness to history as this is the first film festival of Bosnian films in India. Embassy of Bosnia and Herzegovina is thankful to ICMEI and Indo Bosnia Film And Cultural Forum for taking initiative in organizing this festival,” said H.E. Muhamed Cengic Ambassador of Bosnia And Herzegovina to India.

“Bosnian Films may not be big in numbers but they have been part of Academy Awards in USA and Cannes film Festival in France. We have pre war movies and post war movies,” explained Farouk Loncarevic renowned film director from Bosnia.

“Film is my passion and I am teaching films too. Opening of the festival in film University is a wonderful idea. We have the right audience for the films,” added Aida Begic screen play writer and film director from Bosnia.

The festival started with The perfect Circle, 1997 directed by Ademir Kenovic and will also showcase Walter Defends Sarajevo, 1972 directed by Hajrudin Kravac, Fuse (Gori Vatra), 2003 directed by Pjer Zalica, An Episode in the Life of Iron Picker, 2013 directed by Danis Tanovic, Mom (Sa Mamom), 2014 directed by Faruk Loncarevic and Never Leave Me, 2017 by Aida Begic Zubcevic.

Sat Mar 30 , 2019
New Delhi: Renowned film personality and President of International Chamber of Media And Entertainment Industry Dr. Sandeep Marwah was guest of honor at the festival of films from Iraq at Habitat Centre. “I on behalf of Indian Film Industry and ICMEI extend my heartiest congratulations to H.E. Dr. Falah Abdulhasan […] 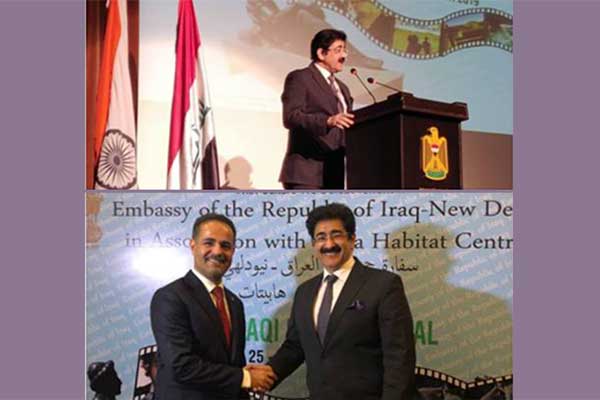