H.E. Koya informed the formal gathering that Fiji was an India away from India as the ancestors of present day Fijians had migrated there from India and had kept alive their culture and traditions.

President ICMEI Mr. Sandeep Marwah nominated H.E. Koya as the Patron of the Indo-Fiji Film & Cultural Forum and announced a scholarship for a deserving student from Fiji for pursuing media education at AAFT.

H.E. Koya invited the President ICMEI to visit Fiji in order to promote Fiji as the destination for the shootings of Indian Films. President ICMEI offered co-production for the shooting of a film in Fiji to promote it as a tourist destination and announced a festival of films from Fiji, which shall soon take place under the banner of Indo-Fiji Film and Cultural Forum of ICMEI.

The visit ended with the firm determination to bring about love, peace and Unity through art and culture between the people of Fiji and India.

Fri Feb 2 , 2018
Noida: “I am going to carry back home to Fiji the enthusiasm which Sandeep Marwah has showered today during our meet of Indo Fiji Film And Cultural Forum,” said H.E. Faiyaz Siddiq Koya Minister for Industry, Trade, Tourism, Lands & Mineral Resources Government of Fiji during his official visit to […] 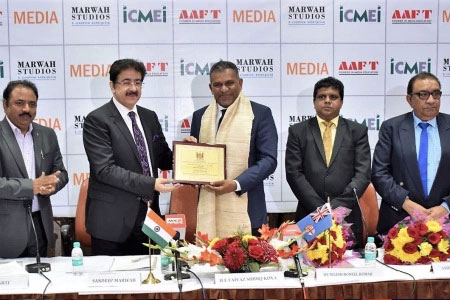