Noida: Two day festival of Films from Azerbaijan was inaugurated by H.E. Juyan Aliyev Charge d; Affaires of Azerbaijan at Marwah Studios at Noida Film City for the students of Asian Education Group comprising of film, television and media students from AAFT and Asian School of Media Studies.

The festival is a part of launching of Indo Azerbaijan Film And Cultural Forum and many commitments have been written down between two countries to strengthen the relations,” said Sandeep Marwah.

It is a very rare moment when hundreds of people watching cinema of Azerbaijan and learning about our country through documentary and feature films. We invite you to visit our country any time. It is a right place to shoot films,” offered invitation by H.E. Juyan Aliyev to the young filmmakers.

The films from Azerbaijan included The Actress, Azerbaijani Cuisine, Baku- In The Mirror of The Centuries and Living At The Steps by renowned film directors of the Nation.

Sandeep Marwah Is Entitled For Highest Award of India 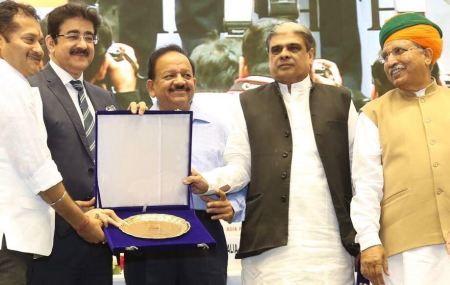