I am indebted to my institution for putting me on such a huge platform today at 7th GFFN and showcasing my feature film Dear V/S Bear an experimental film before a large and educated audienceâ€ said Uttar Kumar renowned star from Haryana and former student of Asian Academy of Film And Television.

â€œWe are proud of Uttar Kumar who has lead role in more than 35 feature films of Haryanavi language and now graduated as producer of feature films. We wish him a very bright future,â€ said Sandeep Marwah President of GFFN and AAFT.

Dear V/S Bear is a Hindi love story with lots of animation and special effects. The film has done extremely well in theatres and this time was entry to GFFN as experimental cinema.

The film was well appreciated by the students of cinema as a well tried film at a low budget scale.

Tue Jan 5 , 2016
Today we need good writers in film industry. Subjects are getting bored and many times they are repeated again and again. New ideas, new wave, new thinking is to be inducted into the systemâ€ said Sandeep Marwah President of Marwah Studios and GFFN. â€œWe are here to induce and motivate […] 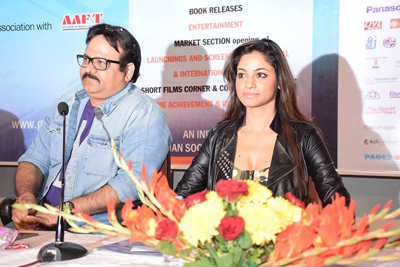