Noida Film City: A special segment was created to project small and tiny films of one minute to three minutes throughout the three days of 3rd Global Festival of Journalism Noida 2015.

â€œThe portion of Nano films was a great hit, any one and every one who- so- ever has visited 3rd Global Festival of Journalism Noida 2015 has seen few films according to his time limit. Ample can be learned and said in these short Nano filmsâ€ said Sandeep Marwah President of Festival.

The ENG Festival part of GFJN became more popular with school and college students. More than 3000 students took the advantage of these festival films.

The ENG will be repeated in the next festival also next year on 12th February 2016 confirmed Marwah.

Wed Jan 6 , 2016
Noida Film City: The evening of the first day of 3rd Global Festival of Journalism Noida 2015 saw the most attractive beginning of opening of Documentary film festival at theatre D of Marwah Studio. â€œIt is a proud moment for the organizers of Documentary Film Festival as we have […] 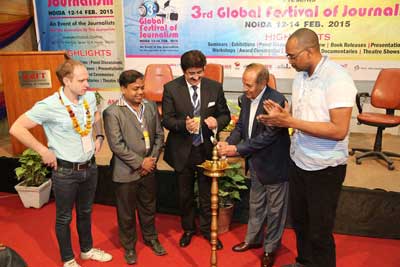