Noida: A dance recital by well-known odissi dancer Sharon Lowen was presented where she not only performed three different set of dances but also explained them in detail. It was a learning exercise for many media persons attending the same.

“It was a great decision to have an international star to perform Indian Dance. It has added a lot to the value of cultural program,” said Dr. Sandeep Marwah President of   the festival. “This is my first performance at Marwah Studios. I never expected such a terrific response from the young generation,” said Sharon Lowen.

Sharon Lowen is an Odissi dancer, trained since 1975 by Guru Kelucharan Mohapatra. She has performed and choreographed for film and television and presented hundreds of concerts throughout India, North America, Asia, Africa, the United Kingdom. and the Middle East.

Sharon came to India in 1973 after degrees in Humanities, Fine Arts, Asian Studies and Dance from the University of Michigan as a Fulbright Scholar to study Manipuri and later Chhau and Odissi.

Later Dr. Sandeep Marwah Presented the life membership of International Journalism centre to Sharon along with memento of Global Festival of Journalism.

Wed Feb 27 , 2019
Noida: “Languages are the most powerful instruments of preserving and developing our tangible and intangible heritage. All moves to promote the dissemination of mother tongues will serve not only to encourage linguistic diversity and multilingual education but also to develop fuller awareness of linguistic and cultural traditions throughout the world […] 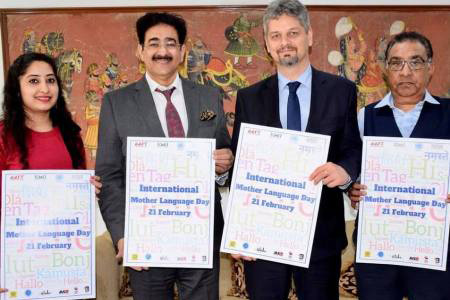