Noida: The disciples of Guru Meenu Thakur a maestro in Kuchipudi Dance sytle presented an electrifying performance on the third day of 1st Global Fashion And Design Week Noida 2017 in an open stage.

â€œWe are feeling strong to present the Indian style of dancing to the large foreign audience present here on the final day of show. These Indian dances and their total getups have given us ample to learn for the fashion. Many designs and accessories have been an inspiration for fashion designers,â€ said Sandeep Marwah President of Fashion Week.

â€œKuchipudi deals mainly with religious themes and relies on the philosophy of living beingâ€™s desire to merge with God. Dance is not just a hobby itâ€™s a way of lifeâ€™â€ said Preeti Sharma now a professional Kuchipudi dancer who performed along with Deepika Bisht and Yoka Wo from Taiwan.

Meenu Thakur is an Indian Kuchipudi dance exponent, Guru and choreographer. She runs an institution â€˜SURAMYAâ€™ for teaching Kuchipudi to young learners in New Delhi. Meenu Thakur is also the culture columnist for the monthly current affairs magazine YOUNG INDIA.

Sat Apr 29 , 2017
AAFT has created a wonderful niche for itself in this part of the World. We have touched our visitors from 163 Countries of the World. A team of 15000 media professionals are working in the creative fields to mark their presence,â€ said Sandeep Marwah President Marwah Studios while joining hands […] 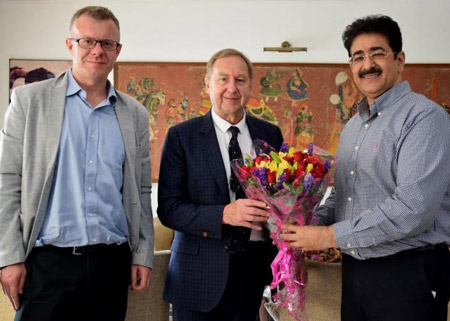