Noida Film City: â€œAAFT Festival of Short Digital Films is the only film festival in the World to touch 86th Edition. This is the only festival which has given an opportunity to more than 2000 directors to showcase their debut filmâ€ introduced Sandeep Marwah President of Marwah Studio in a grand function at Asian Academy of Film And Television.

â€œNever heard of this number as far as film festival is concerned. AAFT has done a commendable job by uniting the whole World through Cinema. I congratulate the whole team for working towards oneness and specialization of their subject of good cinemaâ€ said H.E. Mentor Villagomez, Ambassador of The Republic of Ecuador in India.

â€œTomorrow we will showcase our cinema in a much bigger scale. The films are directed by the students of 86th batch of AAFTâ€ added Dean AAFT.

â€œSoon we will be having a festival of films from Ecuador in your campus. This school has the real cinema audience.â€ Said Dr. Dr. Patricio Garces, head of political and cultural affairs, Embassy of Ecuador in India.

ICMEI And Country of Republic of Ecuador Join Hands

Sat Jan 9 , 2016
Noida Film City: â€œICMEI will open an â€˜Indo Ecuadorian Media And Culture Associationâ€™ to give boost to the films, television. media and cultural activities of both the countries to bring people of two countries togetherâ€ suggested Sandeep Marwah President of ICMEI in a joint meeting at Chamber. â€œWe are open […] 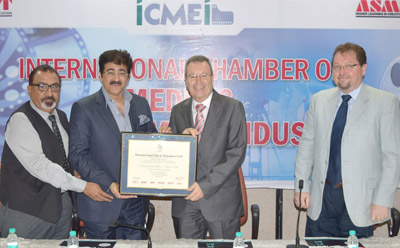