Noida: â€œI am proud of my team members without them we could have never achieved what all we have attained and succeeded.93rd Batch is going to bring more laurels to the institution,â€ said Sandeep Marwah President of AAFT at the 93rd Convocation of AAFT.

â€œA new record has been created in the World of Media when AAFT has announced the convocation of 93rd batch of film, television and media trainees.

â€œ Never ever any film school has churned out 93rd session of trainees in the World, we are first one to touch this number,â€ said Dean Asian Academy of Film And Television.

â€œ12000 students, 120 countries, 3200 events, 5000 training films, 93 Batches and 2300 short films is just the part of the business AAFT has completed today. We are marching towards the biggest and the best film school of the World,â€ added Associate Dean of AAFT.

â€œWe are the only media institute in the World with our own news paper, a 24hour Radio Station, a 24hours Television Station, a film production house, a television production house, a research centre, a film club, a childrenâ€™s film forum, a womenâ€™s film forum, our own audio, video and film studios, a huge technical and cinematography departments,â€ explained Satish Anand Dean Acting And Presentation.

â€œI am amazed and convinced with the whole setup and quality at AAFT, I would love to be the student of this institution,â€ said Anu Sinha renowned Kathak exponent and classical singer present on the occasion.

â€œThe alumni of AAFT is scattered all over India and abroad and working in their chosen field, I interact with them now and then at a profession grounds,â€ emphasized Suparna Trikha Dewan renowned beauty and fashion consultant.

â€œI owe my success to this institution, I knew nothing before I joined AAFT. It has educated me, trained me and groomed me to fight with the circumstances. For me this place is like a religious and spiritual temple,â€ said emotionally charged Uttar Kumar the super star of Haryanavi Cinema and the highest paid actor.

â€œThe institution is 23 years old and has numerous records, no controversy attached to it, is enough to give it a status of Pride of India. It is indeed an international seat of learning,â€ said Dobby Sonthalia Publisher and Editor in Chief of Fame India publications.

Ashok Tyagi of ICMEI, Prof. V.S. Kanan of Post Production Department, Prof Adil Rana of Acting Department and others also shared their views. 63 students of Post Graduate courses and short term courses were presented with the prestigious diploma of AAFT in Production Direction and TV Journalism, Editing And Sound Recording, Acting And Presentation, Camera And Lighting Techniques, Graphics And Animation and others.

Sandeep Marwah Honored With Pride Of India at Goa 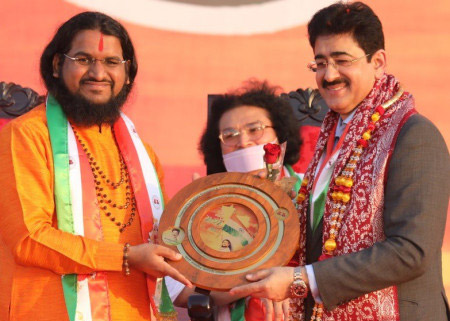