Noida: â€œWe all are indebted to Sandeep Marwah for his untiring contribution to the promotion of residents of Slum Colony of sector 17 in Noida. It all started with Apna School five years back and now he has taken a very important place in the hearts of the residents,â€ said Ritu Singh Principal of Apna School explaining why name of the colony has been changed to Shiv Nagri.

â€œThousands of people in slums go unattended. They are away from all the facilities of lifetime. We can at least contribute to some extend. Apna School was only a trail, now 11 schools and 800 children are a satisfactory number to quoteâ€ said Sandeep Marwah President Marwah Studios inaugurating the session at slums and unveiling the new name as Shiv Nagri.

Savita Sharma, Rajeev Gupta, Sushil Bharti and many other social workers attended the event. The people of slum celebrated the new name with great pomp and show. A musical program was also organized at the event. Ritu honored Sandeep Marwah for his valuable contribution to the slum areas in Noida. 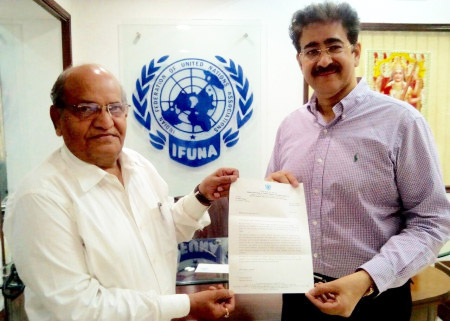