Noida: The most popular school of this side of the World-Asian Academy of Film And Television has started celebrating its completion of Twenty-Five Years of existence.

1993 AAFT was started by the founder of Noida Film City {1986} Sandeep Marwah who started the first professional film studios of North India under the name Marwah Studios in 1991.

Noida Film City, Marwah Studios and now Asian Academy of Film And Television too have become an international brand as far as film, television and media education is concerned. AAFT has started celebrating completion of twenty-five years in education. The film school, which started with four courses and 40 seats, has grown to the first film university of the World.

Large number of events have started taking place in the campus highlighting numerous success and contribution to International film and television industry including 12000 media professional from 120 countries of the World.

A Trip To Varanasi Was Great Success – Sandeep Marwah

Fri May 18 , 2018
New Delhi: The international head quarters of International Chamber of Media And Entertainment Industry in association with Confluence an art organization conducted a trip to Varanasi the oldest town of the human kind. The trip had in its itinerary a visit to different locations of the city, participation in handicraft […] 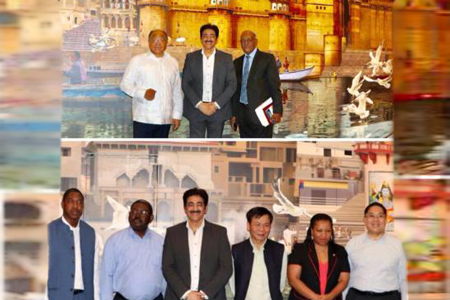