Noida Film City: â€œAAFT is the third biggest and the first ten best film schools of the World. If we talk about value addition we are number one, and also the most cost effective film courses in the Worldâ€ said Sandeep Marwah President of Marwah Studios to the foreign audience attending 3rd Global Festival of Journalism Noida 2015 at Noida Film City.

The event was live covered by Radio Noida 107.4 FM and MarwahStudio.TV for all the three days. It was supported by AAFT and ICMEI. The delegates from all over the World handed over the appreciation to Marwah for his extra ordinary works in media.

Wed Jan 6 , 2016
Noida Film City; â€œOur special attention is towards African countries where media and entertainment industry is yet to grow in large scale. Today we have added Botswana into our programâ€ said Sandeep Marwah President of Marwah Studio & ICMEI explaining activities of the Chamber. International Chamber of Media And Entertainment […] 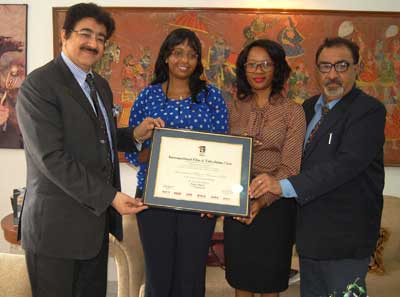