“I on behalf of Marwah Studios and International Chamber of Media and Entertainment Industry extend my heartiest congratulations to the people of Canada on their National Day which falls on 1st July,” said Sandeep Marwah President of Marwah Studios addressing a group of media professionals at Noida.

“Indo- Canadian relations, are the longstanding bilateral relations between Canada and the Republic of India which are built upon a mutual commitment to democracy pluralism and people-to-people links,” said Rajesh Garg of Canadian Nuclear Safety Commission Ottawa chief guest of the day.

“We are trying our best to bring in the people of India and Canada close to each other through arts and culture,” added Marwah.

Mon Jul 23 , 2018
New Delhi: PHD Chamber of Commerce under the leadership of Sandeep Marwah Chairperson of Art And Culture Committee in association with Marwah Studios and AAFT organized a vibrant dance recital by Geeta Chandran. Geeta Chandran is a celebrated artist and a star-performer, she is synonymous with the Indian classical dance: […] 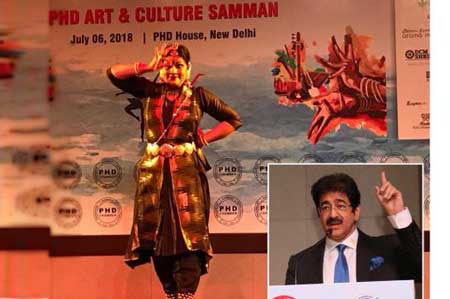