Noida: â€œBulgaria may not be a large film producing country but some of the quality films it has given to the World of Cinema. I am thankful to ICMEI for taking an initiative to have this festival. It is just the beginning of our strong relations between the two countries India and Bulgariaâ€ said H.E. Petko Doykov Ambassador of Bulgaria in India inaugurating Bulgarian Film Festival at Marwah Studio at Noida Film City.

â€œ International Chamber of Media And Entertainment Industry will leave no stone unturned to develop and promote relationship with Bulgaria through art and culture to spread the word of love, peace and unityâ€ said Sandeep Marwah President of Marwah Studio & ICMEI.

The festival was attended by Sangram Shirke President of Western India Film Producers Association also he is the President of Film Craft and Treasurer of Film Federation of India who promised full support to AAFT and ICMEI in its growth and expansion of film, TV, Media and cultural business.

Renowned filmmaker Rahul Mittra of Sahib Biwi Aur Gangster fame spoke about the importance of film festivals in the industry and appreciated the efforts of Sandeep Marwah who has established film city, studio and a world-class film school in this part of the World.

Kapil Gupta Country Head of PolyPlex Corporation, India also spoke on the subject. Later Marwah presented the life membership of International Film And Television Research Centre to the Ambassador and other distinguished guest. Ashok Tyagi Secretary General coordinated the program and paid vote of thanks

Sandeep Marwah On The Jury Of Miss India

Wed Jan 13 , 2016
Noida 27th August: â€œThe presence of Sandeep Marwah in our event will enhance the value of the event. He is experienced and also running one of the finest fashion schools of India. Who can be better Jury member than himâ€ said Kaushik Ghosh renowned international fashion choreographer and administrator of […] 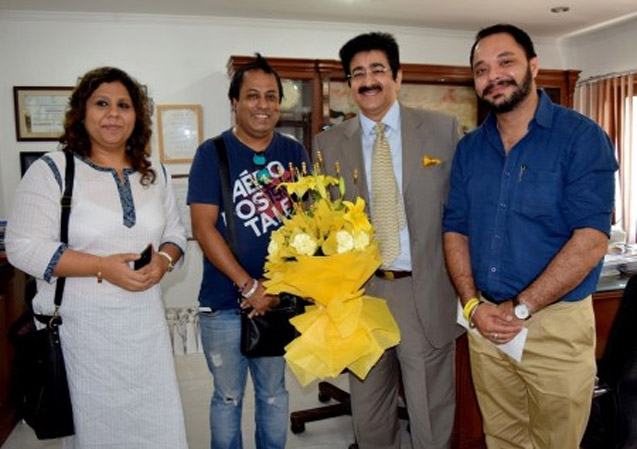