An award winning film Buddha In Traffic Jam, yet to be released commercially was the opening film of 7th Global Film Festival Noida 2014. The house was full still special chairs were added to accommodate large crowd to see this first film of the festival.

â€œWe have tried our best to present the reality in the film, it is our honest efforts and I am amazed by the responseâ€ said Vivek Agnihotri renowned film director who narrated his film.

The leading lady of the film Pallavi Joshi requested the large audience to enjoy the film and saidâ€ I am here to see the response of the audienceâ€.

â€œWe are proud that a very well acclaimed film is the part of the festival, I personally want to thank Vivek Agnihotri to add on strength to 7th GFFNâ€ said Sandeep Marwah President of the festival.

Tue Jan 5 , 2016
â€œThese huge and large preparations speaks about the passion of Sandeep Marwah towards cinema, I congratulate his team to bring in such a massive enthusiasm into film festivalsâ€ said Randhir Kapoor renowned Producer, director, actor and President of R.K.Studios on the inauguration of 7th Global Film Festival Noida 2014. â€œCinema […] 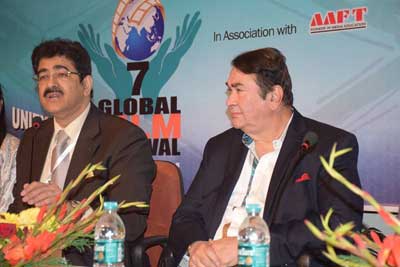