Noida: A group of creative people representing some of the finest companies of United Kingdom visited Marwah Studios to have the first hand information of this creative enterprises in Noida Film City.

Dr. Sandeep Marwah President of Marwah Studios informed the team about Marwah Studios, Asian Academy of Film And Television and all other allied agencies associated with the group including Radio Station, Television Centre and International bodies.

Later Dr. Sandeep Marwah honored all the members of the delegation with the life membership of International Film And Television Club of Asian Academy Of Film And Television. Dr. Marwah has been invited by the group of creative people to United Kingdom who were in India to be part of Indo UK Tech Festival.

Wed Jan 9 , 2019
Noida: The President And the founder of Asian Education Group Dr. Sandeep Marwah addressed the members of the Marwah family on the first working day of New Year 2019. “I am thankful to each and every one of my family who all have contributed to the growth of Marwah Studios […] 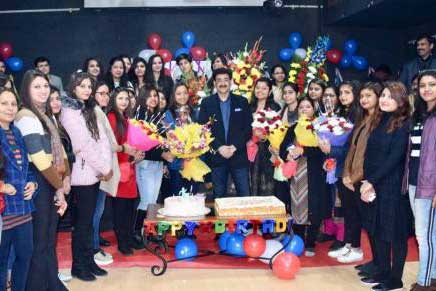