New Delhi: Dr. Sandeep Marwah has been in the business of Glamour for almost 40 years. He started his carrier as theater artist and completed more than 100 shows on stage.

His participation with renowned theatre artist from Delhi in school and college days brought him to lime light. He graduated to television and been a part of many small and big TV programs until he opted to be out of acting and designed film city Noida in 1986 for North India.

Dr. Sandeep Marwah is the Chancellor of First Film University of the country. He has been in film education for more than 27 years, in film studios business in 31 years and created numerous records for himself and brought laurels to the country of India. He has been nominated as Chief Scout For India.

Dr. Sandeep Marwah was the Chief Guest for ASSOCHAM Beauty and Wellness Conclave and Award Function at Hotel Meridien. The memento was presented to Dr. Sandeep Marwah for his unending contribution to the Glamour World.

Literary Carnival Inaugurated at AAFT School of Fashion And Design

Fri Mar 13 , 2020
Noida: “Three important things you have to remember in life to be a better literary person and they are-to read well, to write well and to speak well. What you write becomes history and then it leads to literature,” said Dr. Sandeep Marwah Chancellor of AAFT University while lighting the […] 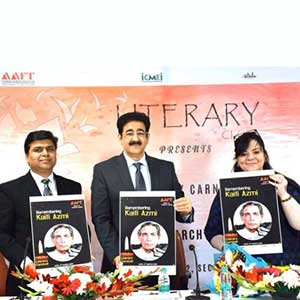