Noida: AAFT-Asian Academy of Film And Television and ASMS- Asian School of Media Studies have special welcoming cell for the alumni. Every pass out of the institution is the part of the facilities available in the campus be it a newspaper, radio, television or news agency to high light his or her achievements.

“It is always a great pleasure to see your students growing in the industry step by step. The students of Asian School of Media Studies Department of Cinema have done a wonderful job in feature film ‘Kerry On Kutton’,” said Sandeep Marwah President of ASMS congratulating the director of the film Ashok Yadav.

“I made five films at the cost of the institute, any one missing from the unit, I used to replace my self and learned the best while studying here at Noida. Kerry On Kutton a commercial film is the result of the same,” said Ashok Yadav Director of many short films and feature film Kerry On Kutton.

There are quite some together in this film from ASMS. Sampada Malla, Yash Saini and Shashank Shekhar Singh produce the film. Shivam Chopra, Himanshu Singh, Rishab Yadav and Sunna Wehrmeiier has given music. Cinematography is by Sushan Prrajapati, Editing by Dilip Deo, Costumes by Ajnan Khare and Songs sung by Nneha Kakkar and Piyush Mishra.

Sat Feb 17 , 2018
Noida: The sixth edition of the most exclusive journalism festival of the World opened at Noida Film City with great pomp and show. Large number of national and foreign delegates made the journalism festival colorful and vibrant on the first day of the event designed for 12th to 14thFebruary, 2018. “Seven […] 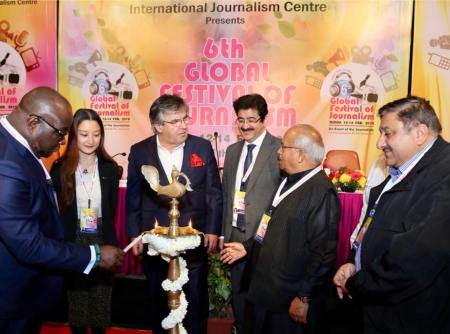