Noida: â€œThe life is nothing without emotions; the real life comes from the activities related to art and culture in the city. These events unite the community and then society in return extends love and peace,â€ said Sandeep Marwah President of Marwah Studios at the 4th Noida Greater Noida Yamuna Expressway Conclave at Hotel Radisson, Noida.

â€œWe have left no stone unturned to bring in huge activities related to art and culture in the city of Noida be it a art exhibition, dance recitals, music recitals, dramas, film festival, Literature festival, journalism festival, Festival of Cellphone Cinema, Sufi Festival and Festival of short films,â€ added Marwah.

â€œAn award functions related to art and culture, journalism, cinema, social awareness and literature are part of our events. More than 3200 events so far has been associated with Marwah studios. Delegates and visitors from all the 29states, 5 Union Territories and 120 countries of the World have entered our territory of Noida,â€ expressed Marwah.

â€œWe want Noida to be the Culture Capital of India. We are lucky that our member parliament is the federal minister of culture and tourism. Noida must get some benefit out of this,â€ concluded Marwah.

Artist Sukhdev presented A piece of Art to Marwah

Mon Feb 20 , 2017
Noida: â€œIt is a wonderful opportunity for me to be part of Marwah Studios. I am impressed by the activities of Sandeep Marwah. I have never ever met a man of that caliber in my life, therefore I decided to convert my meeting into history by painting a portrait of […] 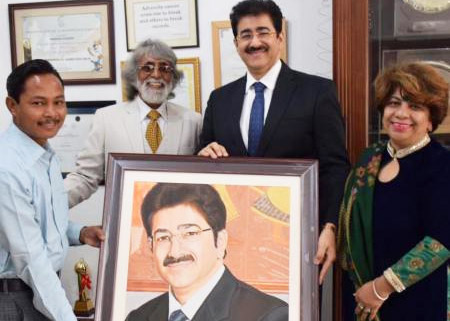