We have once again gathered here to create history in the field of cinema. 7th Global Film Festival Noida 2014 will bring in new innovative ideas and the whole world will follow it till the next yearâ€ Sandeep Marwah President of Marwah Studios introduced 7th GFFN to the members of the board.

Six times with successful results, Asian Society has taken lead in developing and promoting film, television and media business in this part of the World. Three days exercise is heard and seen by all over the World when more than 2000 media houses try to cover the event in different mediums of media.

The film festival be on 11th to 13th November 2014 and a special segment of cooperative movement has been added to it as a mark of respect to Late Proime Minister of India Pt. Jawaharlal Nehru which will close on 14th November on his birth anniversary..

Tue Jan 5 , 2016
2nd Oct. 2014, Noida: â€œWe waist a lot of time in criticizing others, same time we should devote in developing our own selfâ€ started with a spiritual note Sandeep Marwah welcomed the large audience to celebrate Gandhi Jyanti at Asian Academy of Film And Television, Marwah studios at film city […] 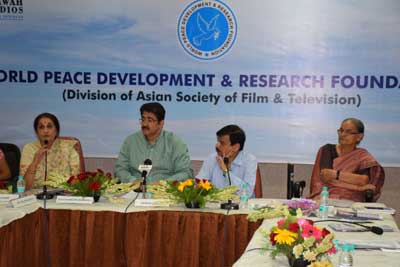