Noida: It was a great evening of 3rd day of First Global Fashion And Design Week Noida 2017 at Marwah Film City where thousands of young fashion designers gathered from all over India an abroad to celebrate fashion and design.

The event became much more important when Sandeep Marwah announced the launching of Indo Ukraine Art And Cultural Forum to be inaugurated by Lt. Gen. K.M. Seth former Governor of Chhattisgarh and Andrii Muliarchuk Deputy Head of the Embassy of Ukraine to India.

Sandeep Marwah immediately after the release of poster of IUACF requested both the dignities to be the first patron of this newly formed committee of International Chamber of Media And Entertainment Industry.

â€œIt is great honor to be part of this organization from the time of its inception,â€thanked Andrii Muliarchuk. â€œYou will get my full support in developing solid relations with Ukraine,â€ added Lt. Gen. K.M.Seth. Later Marwah presented a memento of Global Fashion And Design Week to both the dignities. Dr. Ajay Kumar Director ASMS and Puneet Jindal CMO Marwah Studios also joined on the stage.

Global Fashion And Design Week Hosted 34 Supermodels of the World 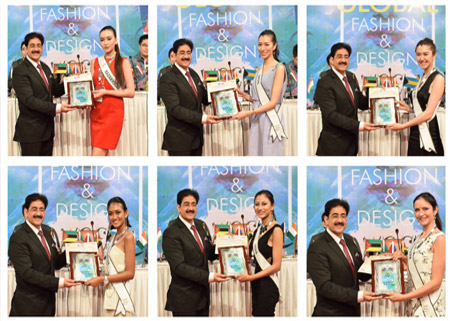