Noida: The most interesting course of Acting at Asian Academy of Film And Television became more happening when renowned actor Vindu Dara Singh took the Workshop with one year and short term acting students in the campus.

“ Learning whole heartedly is the key to training, and presenting that back is the second part of acting. Learning and presenting go hand in hand. I am amazed to see the quality of education at AAFT,” said Vindu Dara Singh while talking to the young actors.

A well known actress Payal Goga Kapoor was also the part of the training program designed for the students.” Diction, speech, good memory, and flexible body make a better actor. I am told that there are separate classes for each one. AAFT has the perfect course in Acting,” said Payal.

Payal Kapoor has been involved with Hindi and English Theater for the last ten years. Dekho Magar Pyar Se, Gaj Foot Inch,and 3 Flights Down are some of the plays she has acted in. Payal has also acted in a couple of Urdu and Punjabi TV serials, and has played the main lead in an Indo Canadian film. Baat Baat Mein Bigdey Haalat, a new Hindi Comedy marks her debut as a Producer.

Mon Jun 11 , 2018
New Delhi: “We need more events to interact with Americans to understand them better so that more business can be generated through these understandings,’ said Sandeep Marwah President of International Chamber of Media And Entertainment Industry and Marwah Studios at American Embassy. Sandeep Marwah was attending a talk by Prof. […] 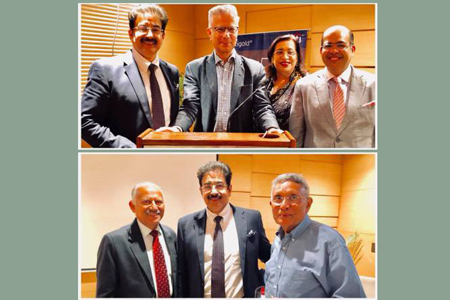